December 7, The Day That Will Live in Infamy 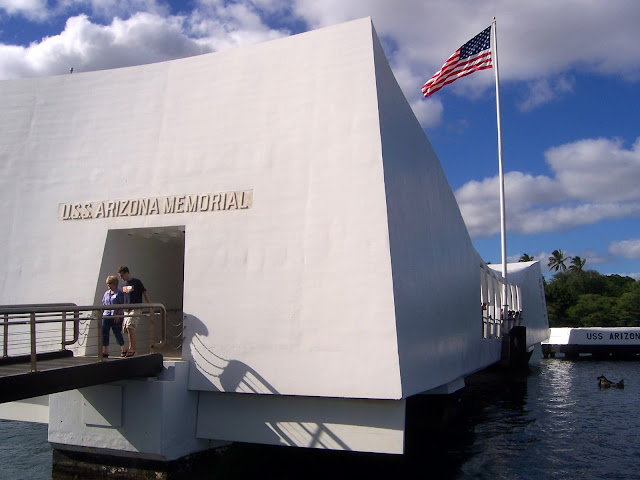 Today is December 7 – The 70th anniversary of the attacks on Pearl Harbor in 1941. During the attack,  over 2000 Americans were killed in and near the waters of Pearl Harbor. Today, Pearl Harbor is still a US Navy Station, it’s also home to several memorials dedicated to honoring the lives lost on that day.

Being from a Military Family, and having lived in Pearl Harbor for several years, this memorial is one that I always felt very close to. I have been to each part of the the Memorial several times. (Which is why some of these photos are taken in very different weather) If you are ever in Hawaii, I highly recommend a visit. 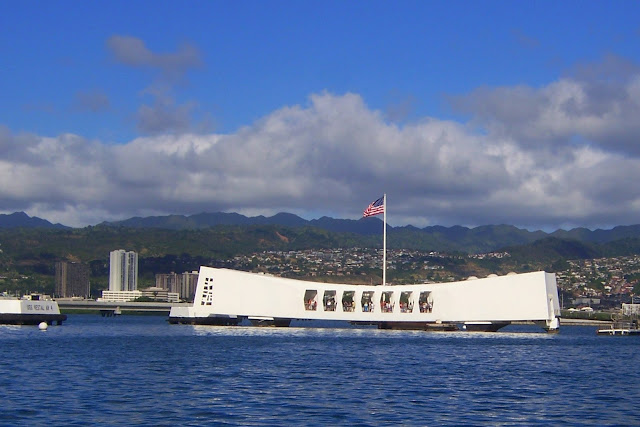 USS Arizona Memorial
The most famous of these memorials is the serene USS Arizona Memorial which sits over the wreckage of the ship. The USS Arizona was bombed by the Japanese during the attack and almost immediately sank to the bottom of the harbor, where it still sits today. 1,177 people were killed aboard the Arizona, more than any other ship involved in the attacks.

Next to the Arizona is the former Navy Warship, the USS Missouri, famous as the site where the Japanese officially signed the Instrument of Surrender after the dropping of the Atomic Bomb. Her location next to the Arizona Memorial means that as you approach each Memorial you can see the Symbolic Beginning and End of the war. 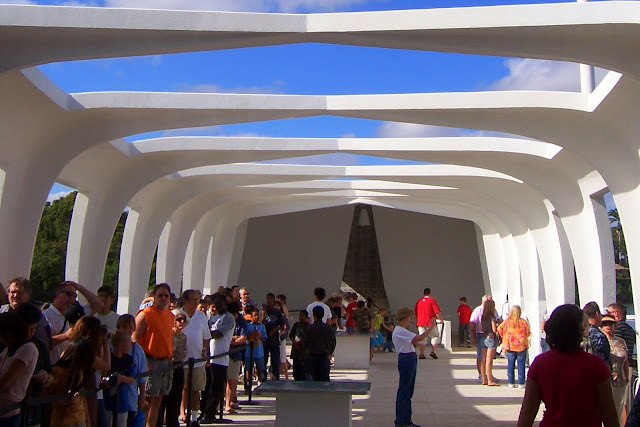 Its only possible to visit the Arizona Memorial via a boat tour. The Memorial itself is open air and usually filled with brightly dresses tourists and  light from the Hawaii sun. It makes a strong contrast to the sober memories provided by the monument. 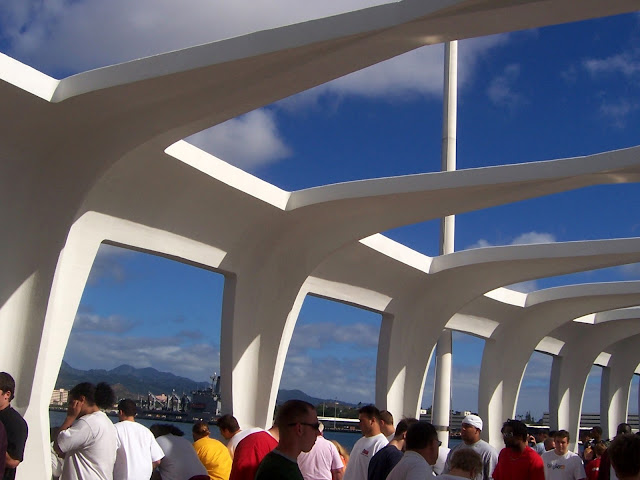 The many “windows” give visitors views of several important aspects of the Pearl Harbor Attacks. The first is the view of current Navy Forces still located in the Harbor. Although devastating, the attacks did not shatter the US Navy as the Japanese had hoped. 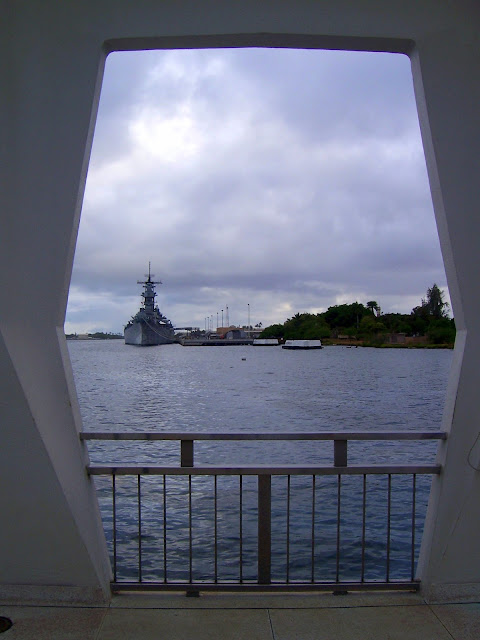 The next important view is that of the USS Missouri Memorial, the official location of the Japanese Surrender in in 1945.

One window also provides a view of the remains of the USS Arizona, just barely peaking above the waterline. Several gallons of oil still remained on board when she sank, and to this day small droplets still leak out and are visible from the memorial. These oil droplets are called the “Tears of the Arizona.” When the attacks began on Dec 7, 1941, it was very early on a Sunday morning and many sailors were still in their beds. Before they knew what hit them, they were trapped inside the rapidly sinking Arizona. Rescue workers were able to hear the trapped men tapping on the hull for days after the sinking but were unable to ever recognize them. Almost all of the causalities from the Arizona are still entombed with her wreckage. This makes the Arizona the final resting place of US service men, with the memorial as their headstone.

Finally, looking up, the windows in the ceiling provide a universal view of the American Flag flying high above the memorial. 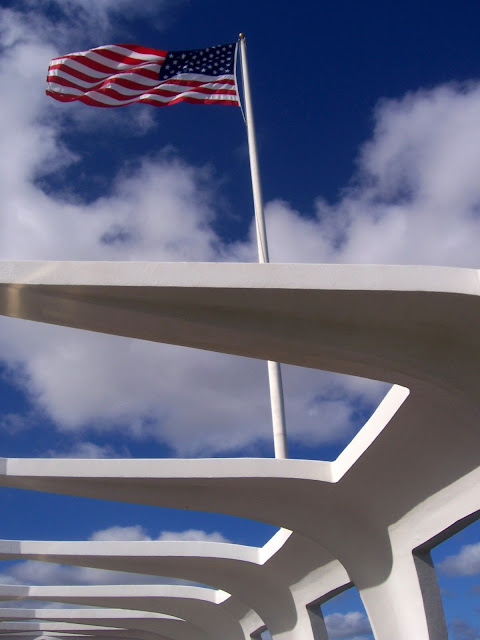 Inside the Memorial, a room off of the main corridor houses the names of all the lives lost during the attacks. The wall is huge and its an impressive reminder of just how many people died, some of them very young. 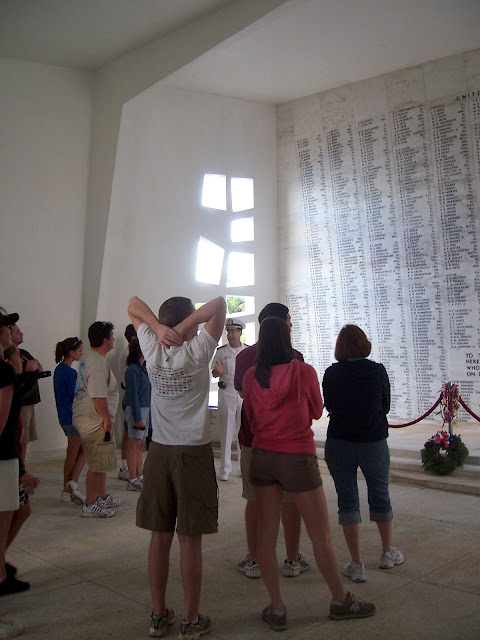 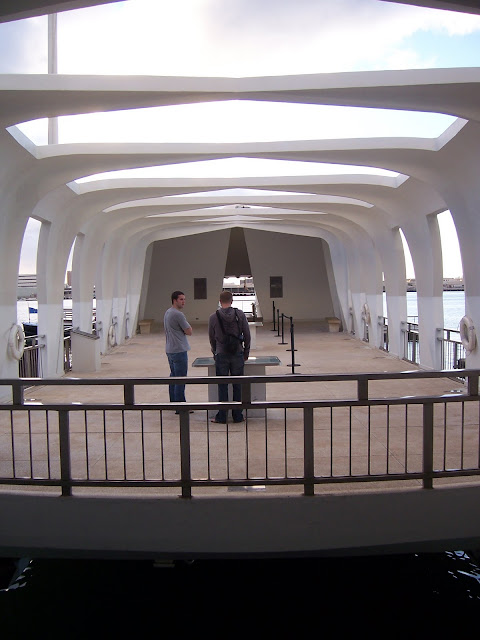 The Arizona is the only ship that remains submerged at its original resting place in the Harbor. However, another two ships, the USS Utah and the USS Nevada are also memorialized within the Harbor. These memorials are only reachable by US Navy personal and visitors need an official escort to visit.

USS Nevada Memorial
The Pearl Harbor attacks occurred very early in the morning when all the ships were docked, making them essentially sitting ducks in the crowded Pearl Harbor. The USS Nevada was the only ship in the harbor to get underway (start moving out to sea) during the attacks. Her crew was also able to shoot down several enemy planes. The vision of her sailing to the sea was an inspiration to many of those still fighting on their own stranded boats.

As she attempted to exit the Harbor, the Nevada was bombed and was forced to beach. Although this may have been seen as a triumph for the Japanese, it was actually a very important tactical decision by the Nevada’s Captain. Had she continued to fight and sunk in place she would have been sunk in the Harbors opening, blocking the exit path for the rest of the ships.

The Nevada wasn’t done though, the Navy was later able to repair and recommission the ship and she went on to fight through World War II. 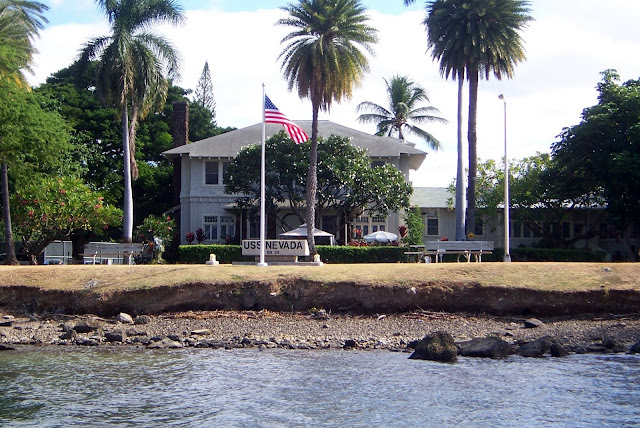 US Utah Memorial
The US Utah was originally sunk at a different location during the attacks that claimed 58 of its crew. However, it was later moved to this location to help remove obstructions from the harbor. Today, parts of the wreckage are visible above the water next to its memorial. 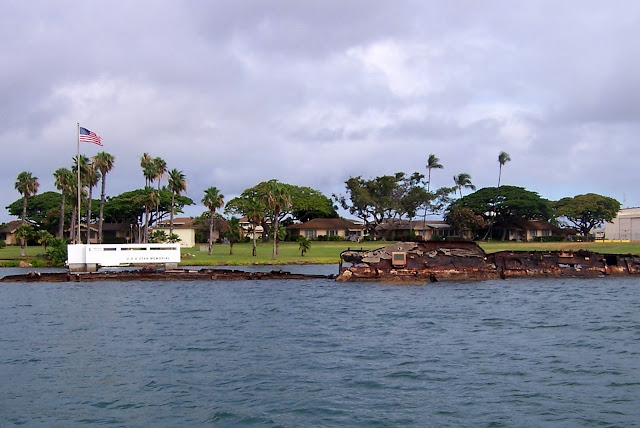 This entry was posted in Destinations and tagged Hawaii, Oahu. Bookmark the permalink.

4 Responses to December 7, The Day That Will Live in Infamy