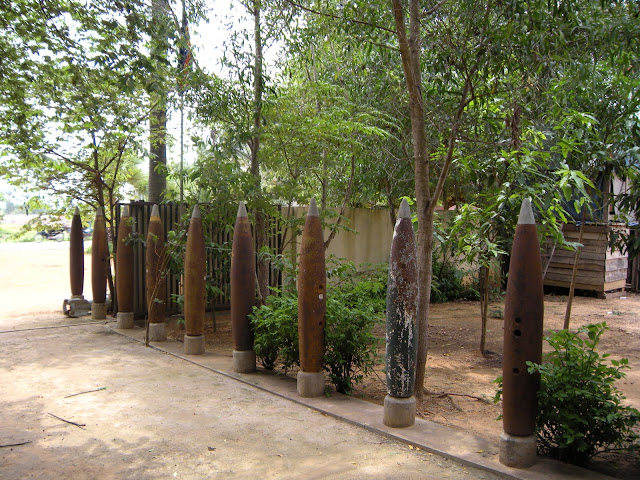 Cambodia is home to the largest number of amputees in the world. It’s impossible to visit the country without seeing amputees – a situation which is only compounded by the lack of availability of prosthetics. Most people are forced to do with ill fitting or homemade devices, or they simply go without. Although I had seen many of these amputees in the entrances to the Angkor temples, it wasn’t until my visit to the Cambodia Land Mine Museum, near Siem Reap, that I fully understood the reasons and implications. Most if not all of these amputees were victims of landmines left over from the time of the Khmer Rouge - over thirty years ago.  One thing about the the mines used in Cambodia is that most of them are designed to maim not kill. The though being that more resources are used for first aid on injured soldiers.

The Cambodia Land Mine Museum is run by Aki Ra, a Cambodian and former child soldier who has dedicated his life to helping remove mines and help the victims.  His story is really interesting and I recommend everyone read about him. 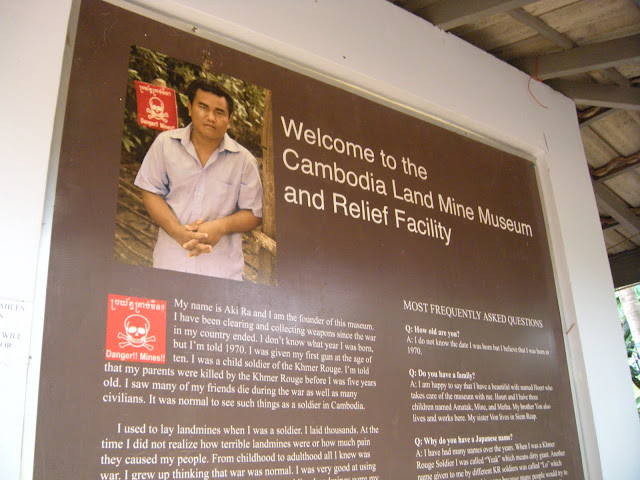 In addition to educating people about the horrors of landmines, the museum also serves as a home to children who have lost limbs to landmine accidents. These children are given room, board and an education. Most victims of landmines have no other option than to beg – Aki Ra offers these children another possibility.

The ﻿﻿﻿﻿Ottawa Treaty
The museum does a good job of providing information about the Ottawa Treaty. This treaty works to ban the use of anti-personnel mines across the world. So far 157 countries have participated in the treaty – one notable exception? The US.  The map below shows the countries who have signed in blue.

﻿﻿﻿﻿As you can see, the US is in …interesting company. So whats the deal? It seems that the main reason that the US isn’t signing is because the treaty does not provide for a “Korea Exception.” What this basically means is that the DMZ between North Korea and South Korea is filled with mines that the US would be required to clear if they were to sign the treaty. The US feels that these mines are necessary in protecting South Korea and preventing aggression for North Korea.

So what exactly does the treaty entail? Those countries that sign the treaty are required to 1) stop using this time of mine  (note that other types of mines are still allowable under this treaty) and 2) destroy any stockpiles of mines they posses.  The treaty also works to help those countries effected by previous mine placement to clear these mines. Unfortunately because the placement of most mines isn’t documented this task can be huge.
Landmine Detection and Removal
Landmines can remain active for over half a century after they are placed.  Long forgotten landmines often claim victims long after the war has ended. Organizations and people such as Aki Ra work to mark and remove these minds to help protect the people living the the nearby areas. The landmine removal process is time consuming, expensive and dangerous. Mines be either deactivated or detonated before they can be removed and both of these processes has the potential to kill or injure.﻿

﻿The Cambodia countryside is filled with mines. In the thirty plus years since the the Khmer Rouge, many of these areas have been cleaned up but some experts estimate that there could be as many as 6 million still remaining in Camboida. Signs like the one in the picture below are not uncommon. In areas that are thought to be heavily populated with mines, such as the city of Battambang, its recommended that people don’t leave the well marked paths for any reason, even for calls of nature. As one guide book put it – better to loose your modesty than a leg.

In my recent post about the War in Bosnia and Herzegovina I touched on the landmine situation in Sarajevo. During the tour given to us by our local hostel owner, we saw several areas still thought to contain landmines. Unlike some of the mines in Cambodia, these mines are often marked with pieces of yellow tape tied to a tree or sticks. As you can imagine, this isn’t the most permanent marker and our guide actually pointed out an area that had been previously marked and now the tape had been removed. This meant that people who weren’t as familiar with the area would be in danger of stumbling into the mine area.

This entry was posted in Destinations and tagged Cambodia, Siem Reap. Bookmark the permalink.