Although Istanbul is full of famous historic sites, its also a really fun city to just hang out in. During my visit there in November 2009, we had a great time eating, drinking and smoking the traditional Turkish water pipe: Narleigh. Although we ate out almost every meal we were there, we quickly found that the best food was the street food.  Our favorite were this (lamb?) meatball sandwiches being sold by men in carts near the river on the way to Ortakoy. 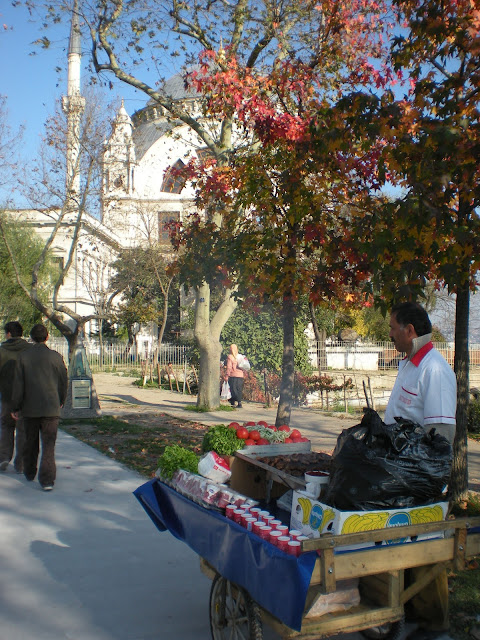 The men had fresh vegetables, spices and meat which they would grill up right there when you ‘ordered.’ It was seriously the most delicious sandwich I’ve ever had. I’ve tried to recreate it several times with no luck, so if anyone knows exactly whats in them, please let me know!

Our favorite spot to hang out and enjoy the city was the Galata Bridge. The Galata bridge spans the Bosphorus River and therefore connects the Asian and European sides of the city. The bridge has two levels: one for traffic and the other for pedestrians. The pedestrian part of the bridge is lined with restaurants and cafes with views of both sides of the city.

Our favorite place on the bridge had  super comfortable (and colorful) bean bags with a view facing the side looking back into the city. We spent many hours sitting on the bridge smoking narleigh and drinking tea and watching the sunset over the riverside mosques.

The pedestrian portion was the lower level of the bridge. Traffic was on the upper level along with the fishermen catching the meals for the restaurants below. While sitting on the bridge we could see the lines being lowered down into the river and the fish coming back up.

Apparently many of the restaurants below served the fish strait out of the river. Since the guide book specifically warned against eating the fish in the city, we didn’t try any. But there was something really cool about walking along the top of the bridge and watching the fisherman.

We spent most of our time in the older part of the city, but one night we went to the more modern part of the city.  Several of the alleys were packed with restaurants and food vendors.

The food was actually pretty good. Lots of cheese, kabobs and other spiced meats. However, we were  ripped off several times with classic tourist traps such as bringing bread to the table without asking and then charging for it, etc.

But hands down, our favorite food was the Doner Kebabs.  They are pretty much sold everywhere in the city, but the best places where the outdoor ones. You could recognize them easily by the giant rotating meat slabs in the windows. When you ordered one, they would shave off  meat from the side and put it in a wrap or sandwich with lettuce, tomato and other spices.