On my way from Siem Reap to Phnom Penh I stopped in a town called Battambang to see some of their Angkor temples and ride the famous (well famous might be questionable) bamboo train. During the reign of the Khmer Rouge the trains were discontinued but the overgrown tracks still remain in many parts of the country. In Battambang, the locals have developed their own system of transportation using these abandoned tracks.

Passengers sit on platforms built out of bamboo with engines attached to the back where the driver (who controls the speed) sits. For $10 I was able to take an hour long drive through the Battambang countryside.

After about 30 min we stopped near a small drink stand. Until this point, I hadn’t really thought about how we were going to turn this contraption around. As it turns out, it was much more strait forward than I thought. My driver got the attention of another guy and the two of them lifted the platform off its wheels and turned it around.

Then we headed back down the tracks towards town. 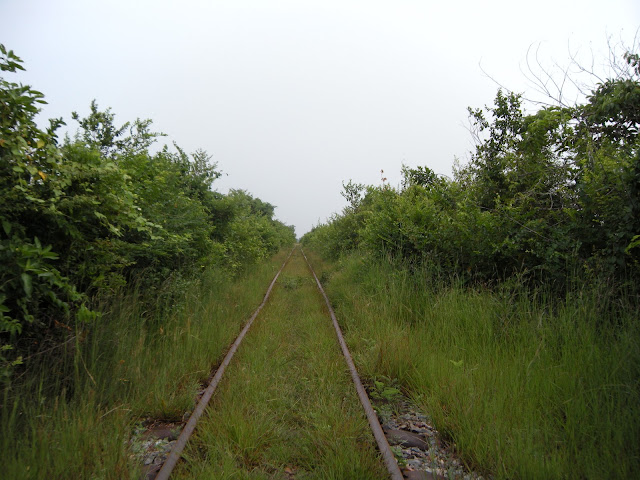 Another obstacle which I hadn’t considered was what would happen if another bamboo car came in the other direction. But again, this was quickly sorted out the most obvious way. The two cars approached each other, stopped, and my car was quickly unloaded and picked up off the tracks.

Once the other car had passed, my car was reassembled and place back on the tracks. I was later told that the car with fewer passengers was the one that had to make way for the other car. If that description was a little hard to follow, the video below shows the bamboo train in action.

This entry was posted in Destinations and tagged Cambodia. Bookmark the permalink.