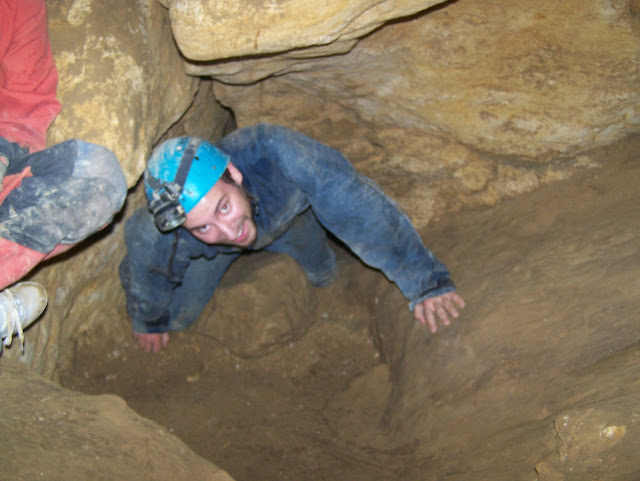 Budapest is well known for its natural thermal springs and no trip to the city is complete without a visit to one of the famous spas. But, what many people don’t know (including myself prior to this trip) is that all of this thermal water moving under the city leaves behind a network of tunnels and caves. Because of this, Hungary is also home to some of Europe’s most extensive caving systems.

As I said, before my visit I hadn’t heard anything about this caving, but a flyer in my hostel (complete with clip art bats) and an enthusiastic review from the hostel owner was enough to convince me to sign up. I convinced a (very) new friend to go with me and crossed my fingers that my on again off again claustrophobia wouldn’t cause a traumatic experience.

The trip was estimated to take around 3 – 4 hours and was oddly scheduled to begin at around 4 pm. Since it was winter in Budapest this meant it was getting dark as we gathered at the appointed meeting spot. When we registered, the company had told us only to meet at the bus stop at 4 pm with 2 bus tickets and a pair of old shoes. Since I was on a work trip, I wasn’t exactly packing old tennis shoes, so I wore my winter boots and hoped it would work out.

After meeting up with our guide and other cavers we took a city buses about 30 min outside of the city and then transferred to another bus. We then walked about 5 blocks along a country road and walked down a snowy hill to a small cabin. By this time, the sun had set and it was completely dark. I was very happy at this point that I was with another person who I sort of knew, because this was shaping up to be just about the sketchiest “tour” ever.

At the cabin, we were split into two groups of about 8 people and instructed that we would not be allowed into the cave it we were under the influence of any drugs or alcohol. We were also told that it would be impossible to use the restroom inside the cave so it was suggested we take care of any necessary business now. As the owner of the world’s smallest bladder this made me slightly nervous.

Even though it was freezing and snowy outside, we were told that the caves were warm (again the thermal temperatures) and that we shouldn’t wear many clothes under our jumpsuits. I stripped off my 13 top layers down to just a t-shirt and jeans and donned my provided full body jump suit and helmet complete with head lamp. We were advised to leave all our valuables in lockers to prevent lose or damage. The caves are extremely dusty, and cameras and other gadgets can get easily damaged from the dust.

﻿ After everyone was dressed, our guide led us through the dark snowy woods to a small metal door. He explained that this was the man made entrance to the cave which would allow us to descend down into the natural caverns. At this point, the only light came from our groups head lanterns so it was sometimes hard to see anything except what was directly in front of you. We all entered the cave and descended an old metal latter into the cave.

The cave tunnels and taverns are much smaller than I had imagined (although the cave network itself is huge – our tour would only cover a small portion of it). Most of the journey was spent crawling on hands and knees in a line. On some occasions it was even necessary to lie flat and worm your way through a tight opening. This tight spots often took each person several moments of squirming and wriggling before they were able to squeeze through (although there are alternate routes for people who are nervous about these very tight spaces.)

The cave system is also far from linear, and we spent lots of time going up and down as the depth of the cave changed frequently. Our guide was great and helped everyone navigate the various foot holds and angles so that no one ended up stuck. However, with all the sliding and crawling we were all filthy within 10 minutes. 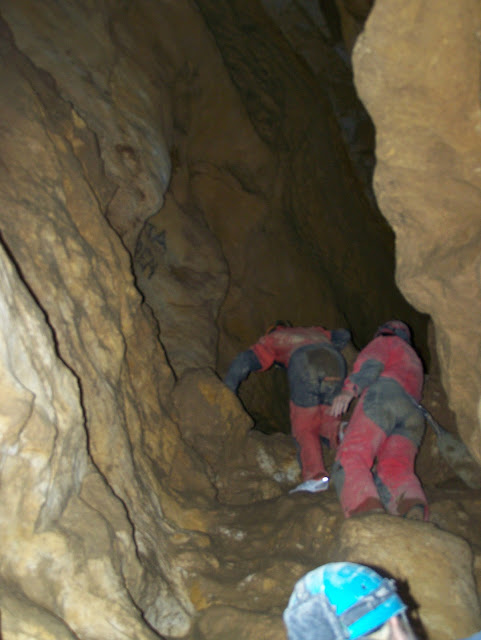 The entire process was absolutely amazing and so much fun. Because of the team work required, we all felt like old friends by the end of the tour. Although I was initially nervous, I ended up having a great time. The cave was very peaceful and beautiful and it was fun to challenge your mind and body to find ways through each obstacle. 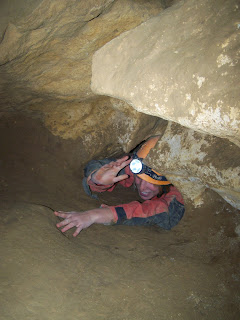 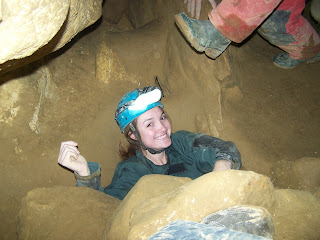 At the end of trip, the guide asked us all to turn off our light and sit in silence. It was an amazing feeling to know you are sitting in 100s of feet under the city in complete darkness and silence. He then asked us to try ‘blind caving’ which involved going about 20 feet through the cave leading each other by touch and sound only. Progress was extremely slow as you can imagine since each person had to communicate every step up and change in direction to the person behind them in the world’s most nerve wracking game of telephone. But using only our hands to feel around us gave me a totally new prospective on the cave.

﻿
At the end, we all turned on our lights and climbed back out of the cave and into the freezing cold. Definitely one of the highlights of my trip.

Oh and my shoes were totally ruined.

This entry was posted in Destinations and tagged Budapest, Europe, Hungary. Bookmark the permalink.