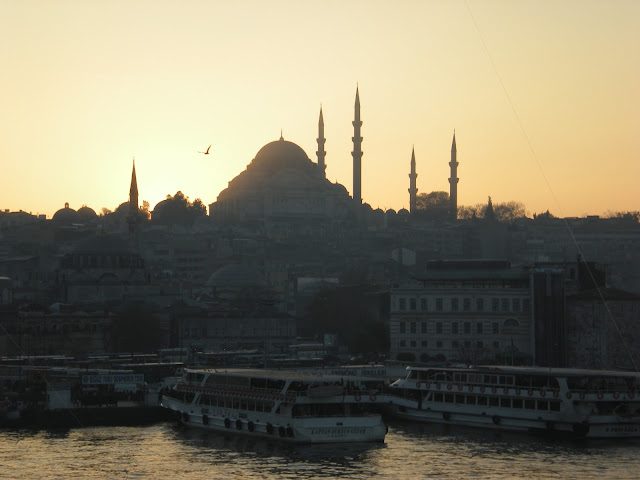 ﻿ ﻿The next day we took a flight from Athens, Greece to Istanbul, Turkey.  I am going to be honest, on first landing in Turkey I was a little nervous that we had made a mistake. From the airport we had to take two metro trains to get to our hotel and we went through so seemingly rough parts of town. Combined with the fact that Istanbul was colder and more overcast than Athens, the whole thing was feeling a little gloomy.
Istanbul is an amazing city, not only because of its history but also because the city spans two continents: Asia and Europe. The rest of the country sits solidly in Asia, but the western side of Istanbul is European. This along with the multitude of peoples and cultures that have come and conquered the city over the past thousands of years makes  it one of the most interesting cities I’ve ever been too. However, I didn’t know that at the time.

We got off the metro and got lost several times trying to find our hotel, but were eventually able to find it and attempt to check in. Unfortunately, when we spoke to reception they informed us that the hotel was overbooked. Well…sucky.

Lucky Break #3: Because the hotel was booked, they upgraded us to their sister four star hotel a few doors down.

Man was this hotel nice. And the are of town we were staying in, the old city, we very tourist friendly and close to all the main sites. The hotel had a pool and a huge free buffet breakfast every morning. I started to take a real liking to Istanbul.

After dinner and our first shots of Raki (a really not pleasant tasking liquor) we were able to meet up with HL. He had accidentally gone to the wrong hotel but he tracked us down and we went to try out one of the things Turkey is famous for – the Humams.Humams are Turkish bath houses.  There are many many humams in Turkey, ranging from the local utilitarian type to huge touristy marble palaces with fountains and bath attendants.

We chose the Çemberlitas Hamam which falls into the huge marble palace category. It was located near our hotel and open late so it seemed the perfect activity for the first night. Men and women bathe in seperate areas, so we bid farewell to HL and headed into the changing rooms. Like the overly modest Americans that we are, we had brought swim suits which we planned to wear through out the bath. We ignored the topless Europeans and headed into the main area.


For obvious reasons, I couldn’t take photos, but the bath house was breathtaking. In the middle of the large marble room was a raised platform below a skylight. On the outer ring of the room were intricate fountains and doors to small rooms with heated pools. After some disapproving tsks tsks from the attendants, we were convinced to remove our swim tops and lay down on the marble platform.  The attendants then take you through a serious of scrubbings and washings until you are told to go relax in the heated tubs. The attendants themselves wear nothing but black lace panties. The whole situation was a little bizarre for me but as HL later admonished us “Stop being so American.” Touche.


After the Human, we we headed back to the area near our hotel for some Narleigh (water pipe) and lamb kebabs before bed.

This entry was posted in Destinations and tagged Istanbul, Turkey. Bookmark the permalink.

5 Responses to Istanbul (was Constantanople)