The next day, after eating the massive hotel buffet breakfast,  we set out for a full day of sight seeing. The first stop is Topkapi Palace which is the former home of the Ottoman Sultans during the rule of the Ottoman Empire. One thing that surprised me about Istanbul was the steep admission costs of all the sites. The Palace alone was about $20 just to enter.

The palace is very large and ornate, but I wouldn’t say it was worth the admission fee especially since if you want to see the Haram room, you have to pay an extra admission fee. However, it was very interesting to hear all the stories about the life of the Sultans. Fights to the death amongst siblings, multiple wives, intrigue, the usual…

After the palace, we went to the most famous of Istanbul site, the Hagia Sophia. The Hagia Sophia used to be a church during the time of the Byzantium Empire and was then turned into a Mosque with the invasion of the Ottomans in the 1400s. Today its a museum with another $20 entry fee.

﻿ Besides its history, the Hagia Sophia is also famous for its architecture – I remember studying its use of space in art history. And really the inside dome is huge… unfortunately it was filled with scaffolding during my visit.  Also, because of its transformation from church to mosque, much of the church has been destroyed or modified. Many of the mosaics were removed, and large circular plaques with Arabic writing were hung around the ceiling.

The next site we went to see was the Blue Mosque. Named for the use of blue tile on the inside, this is actually a functioning mosque (so thankfully no entrance fee). We were required to cover our hair, wear long pants and sleeves and remove our shoes. We entered through the side door which is used by non Muslims. Muslims use the main entrance.

The Blue Mosque is gorgeous – much prettier than the Hagia Sophia.  Also, it has a very peaceful air about it. The floor is covered in carpets and the ceiling is very high with giant windows. Plus almost every inch is covered in colorful mosaic. 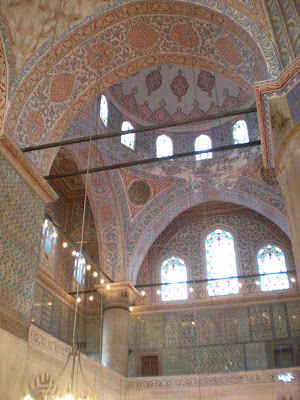