Arequipa in southern Peru is called the White City because of the white stone much of the buildings are made of a white volcanic stone common to the area. Our time in Arequipa was sunny and somewhere warm and I really enjoyed seeing the city. It reminded me of  a city in Europe. We arrived in early afternoon with just enough time to visit two of the cities most famous attractions: the Monastery of Santa Catalina  and Juanita the frozen mummy.

Juanita is a very famous well preserved mummy found in the crater of a volcano. She and her fellow mummies were most likely human sacrifices. The mummies and museum are pretty cool, but it was freezing inside and we were ready to leave before the never ending guided tour was finished.

One thing I haven’t mentioned so far was the horrible bug bites CP and I had gotten during our hike at Machu Pichu.  Each of our legs were covered in bites and by the time we got to Arequipa they were red and swollen. They turned out be nothing and went away a few weeks later but at the time they were a bit concerning.

The Monastery of Santa Catalina is a huge old monastery filled with beautiful rooms painted in primary colors. The place is huge, almost takes up an entire block. We attended the monastery by candlelight exhibit which is only offered on certain nights. It made the experience very surreal and almost creepy at some points, not to mention cold – I think I might have preferred it in the daylight. Because visited at night, so my pictures are a little blurry, but you can still see how vibrant all the colors were. 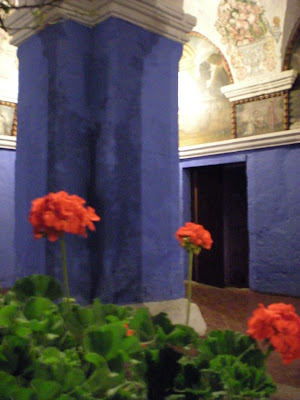 The next day we went to a local market that sold food and other items. There were lots of delicious things for sale and visually it just looked really cool. 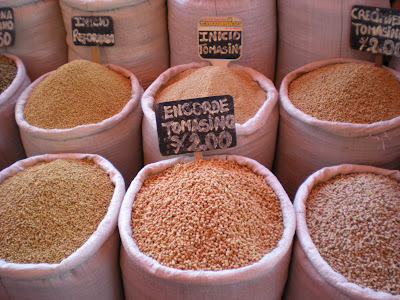 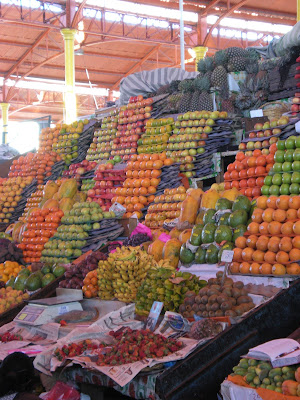 Later AF departed to go back to the states and CP and I went to visit the Monasterio de la Recoleta. While not as large as the other Monastery, it had the same brightly painted walls and a very beautiful facade.  The rooms were also filled with strange exhibits about local plants and wildlife, as well as a very old library. For the most part the place was empty and it was very peaceful to wander through the rooms.

After that we wandered around the town, had some sangria, visited some historical colonial homes and ate lunch. We had another bus to catch that night, but we killed some time by attempting to attend a Spanish version of the classic Mama Mia. The tickets were only $3, which should have be an indicator of the quality. All in all it was very strange, there were long pauses between scenes and there wasn’t any scenery or staging to speak of…. Oh well, worth a shot.

This entry was posted in Destinations and tagged Peru. Bookmark the permalink.

One Response to Arequipa