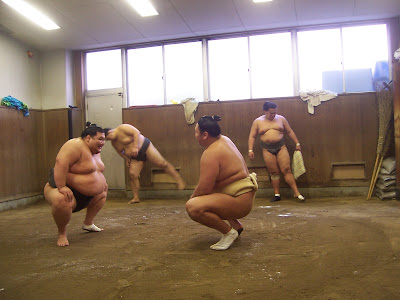 Okay so now that I completely bored you with a pointless post about a city with a mall, I’ll move on to the main attraction: Tokyoooooo (extra Os optional).

(Side note, I feel like everyone should be impressed that I made it through an entire post without talking about how much I hate Delta airlines. Its not just that I think they are the worst, most poorly managed airline in the entire world. Its also that I think they are owned by Satan. But I didn’t mention that once through that entire last post.)

So anyway, we did the ‘bag drag’ to Tokyo, which means we took the train. It only took about two hours to get to our hotel which wasn’t bad. One thing I forgot to mention in the last post about the trains is that they are super crowded. Go to Youtube and search for crowded tokyo trains and you can see the videos of people literally being shoved on by employees. Apparently, this has also led to some issues with men groping the women who were jammed into the car with them. To combat this, they created women only cars on a lot of the trains. They are signified by little pink signs at the boarding locations.

Anyway, in case you didn’t know Tokyo is kind of intense. Not like Cairo intense, more like NYC on acid intense. But apparently its very safe. I think it has one of the lowest crime rates of any major city.

The first thing we did was to go to a Sumo Wrestler Practice. I think it was basically in someones house. As far as I could tell, they all trained at this place and practiced here until they somehow hit the Sumo big time. Sumo is really kind of amazing, the guys are huge and they hit each other really hard. They also wear basically nothing and yell a lot. I’ve never tried it, but I think I wouldn’t be a natural.

After the practice, we went upstairs for some noodles and tea. I didn’t love the noodles, I’m going to be honest. For some reason, lunch and tea time was also Sumo dude hair appointment time. They all came up and got their hair done while eating their noodles. So we watched that for a while and then left.

Next we went to the Tokyo tower which give you a really good view of the whole city. Tokyo has a really pretty skyline so it was pretty cool to see.

The next day we went to see a Japanese tea ceremony and learn how to give (present, host?) one. Although its a valuable skill, I have yet to find myself using it in my day to day life. However, I haven’t yet ruled out the job of Geisha so there is still hope. Japanese tea ceremonies are incredibly complicated. Each step is meaningful and must be performed in a specific precise way.

On the last day, we took a ferry to see the very famous five storied pagoda of Senso-Ji Temple in Asakusa. The temple was a bad house that day. People everywhere. You enter the temple through a gate with a giant lantern and then walk up a path to the main temple. Along the path were tons of vendors selling food, toys, offerings, etc

At the top is the temple and the pagoda. My favorite part of any temple is the offering board. (I am not really sure the real name, so lets go with that). Basically for a few hundred yen you can buy a little wooden board and you can write your prayer or wish on it. Then you hang it on the board and I guess then it comes true. Obviously most of them are written in Japanese, but a good amount are written in English. Its really interesting to go through and read them. 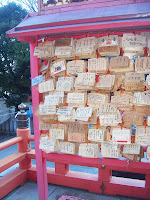 But that isn’t the only way to make a wish. You can also go over near the pagoda and donate a coin to find out your fortune. Once you pay the coin, you shake this box until a stick with a number comes out. That number matches the number on a tiny door. Once you find that door, you open it and then you will find your fortune. If you like it, you keep it, if not you tie it onto these wires and I guess the spirits take it away.

I wished that delta would stop sucking so bad.

Thought I would share some of the other wishes made by fellow visitors to the temple.

Don’t ever forget about world peace:

Some people had a lot on their minds. Its important that you hit the global as well as the personal issues:

This entry was posted in Destinations and tagged Japan, Tokyo. Bookmark the permalink.