Journey to the top – Part 1

I’m going to be honest, I think the reason I wanted to go to Peru to begin with was to see Machu Pichu.  So of course we decided to do it first thing… well sort of. Getting to Machu Pichu has got to be the most difficult thing in the entire world. One just doesn’t hope off the plane in Peru and head up the mountain. No, its like a freakin adventure quest. Not to sound like a huge nerd, but it reminded me of the Zelda 64 game I played when I was younger where…okay stopping before the nerdiness gets worse…

Step 1) Fly to Lima
We flew into Lima and took a cab to our hostel. It was late and we were tired so we had just enough time to get some dinner and see the Plaza de Armas or town center. We also found the most amazing churro place. It was the start of a life long love of churros. Lima wasn’t great, it was a little overcast and kind of reminded me any other big city. Lima was also absolutely freezing, luckily we had brought sleeping bags so we were able to use those in our beds and get some rest which was good because was had an early flight the next morning.

The next morning we woke up early to catch a flight to Cusco in the southern part of Peru. I was super relieved when we arrived and it was warm and sunny. We had train tickets that afternoon from Ollantaytambo to Aguas Calientes (the town MP is located near) so instead of figuring out the bus situation we decided to hire a cab for the day to drive us through the Sacred Valley on our way to Machu Pichu. This had several advantages not the least of which was I was tired as anything. Plus it meant we got to stop at a lot of cool places on the way.

The llama farm was awesome. I imagined it to be a haven of cute llamas running around in some little mountain stable where I could feed and pet them – and it totally was.  They had about 40 llamas running around and you could feed them grass and pet them or just generally hang out. There was also a museum and a store showing how llama fur was used to make sweaters and other wool products. I just loved petting the llamas. At one point, I was in the llama pin and I had stuck my bag with my camera and money in my back pocket. I had heard about how bad the pick pockets were in Peru, but I mistakenly assumed I was safe in the llama pin. Suddenly, I felt someone tugging on the zipper pull, try to get the bag out of my pocket. I turned around to catch the thief only to find this:

The next stop on our way through the valley was the town of Pisac. There wasn’t much to see here, but as luck would have it, our journey through the Sacred Valley was on a Sunday which is the day of the weekly Pisac Market. The market sold all sorts of handicrafts and food as well as the usual tourist stuff. It was really fun and I ended up getting two llama fur blankets. I didn’t really have the room to carry around two blankets in my backpack, but oh well.

We finally made it to our first ‘destination’ the town of Ollantaytambo. The only way to get to Aguas Calientes is by train – there are no roads to the town. Because of this you can imagine that their is quite the monopoly on these tickets. The train leaves from several locations, including Cusco, but by the time we bought our tickets, the only available departure place was Ollantaytambo. So we had our cab driver drop us off there to wait for our train. We had several hours to kill, which was good, because there are some pretty famous ruins in the town that are worth seeing, and it gave us time to eat dinner before we got on the train.

The ruins were pretty cool. It involves hiking up a lot of stone steps and at the top you have a decent view of the town. Dinner was amazing. I think I also might have been starving. 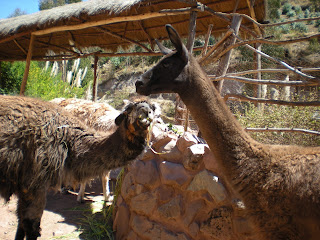 This entry was posted in Destinations and tagged Cusco, Peru. Bookmark the permalink.